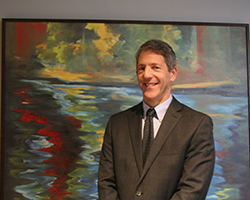 Stephen A. Simon is a partner with Tobias, Torchia & Simon. He received his B.A. degree from the University of Michigan, with distinction, and his J.D. from the University of Cincinnati College of Law, where he was made a member of the Order of the Coif. Mr. Simon is licensed to practice law in Ohio and Kentucky, and he has argued cases before the Ohio First District Court of Appeals and the U.S. Sixth Circuit Court of Appeals. He has been recognized as an Ohio “Super Lawyer” since 2009 and was recognized in 2011 as one of Cincinnati’s Top 50 attorneys.

Mr. Simon has spent his entire career practicing in the area of labor and employment law. He represents individuals in employment-related disputes and litigation, which includes matters involving the Family and Medical Leave Act, the Fair Labor Standards Act, the Americans with Disabilities Act, wrongful discharge, and claims of discrimination based on age, race, sex and pregnancy, among many other types of claims.

Mr. Simon is the current vice-chair, and former chair, of the Cincinnati Bar Association's labor and employment committee. Mr. Simon regularly speaks to local groups and associations on the subject of employee's legal rights and responsibilities, and he served as Chapter Chair for two chapters of the American Bar Association treatise, Employment Discrimination Law, Lindemann & Grossman (4th Ed. 2007). In addition to his work as an attorney, Mr. Simon has served as president of the community council of Pleasant Ridge, a neighborhood in Cincinnati where he and his family live. Also, for many years he served as an adviser to Reading High School's mock trial team.

Topic of the Week

How to Navigate Professional Connections as a Remote Worker

Consider a few tips that can make it easier to communicate and network remotely.

Thought for the Week

"While there are some concerns about automation replacing human workers, AI is most successful when coupled with a human touch—or at least some human oversight. AI will likely play a large role in the future of work, but rather than replace employees, AI technology will change what type of work employees perform. "

Did you know that 2 in 5 Black workers feel they faced race- or ethnicity-based unfair treatment at work in the past five years?